The WHO has estimated that the number of people aged 65 and over will increase by 88% over the next 25 years due to an ageing world population, better public health and an increased use of medical interventions that prolong the average life expectancy.  Furthermore, the number of people aged over 85 years in the UK is predicted to double in the next 20 years and nearly treble in the next 30 years (Office for National Statistics 2013).

It is important to improve the management of patients at risk of falls and fracture.  Cost estimates for hip fracture treatment predict a 243% increase in costs to £5.6 billion by 2033.  This reflects the cost of treating an increasing number of patients with complex medical comorbidities and social needs who are likely to experience greater rates of mortality, postoperative morbidity and longer inpatient stays.  Associated costs are likely to climb at a faster rate than those calculated on projections based on changes in the age demographics alone (Baker et al, 2014).

Nationally, almost 200,000 falls could be prevented and £275m saved each year through better access to physiotherapy.  The savings could be even greater because physio led services can reduce the severity of a fall should one still occur.  Failing to invest in physiotherapy could see care home admissions caused by falls increase by 19% by 2020 – at a cost of £124.8m annually.

Falls data should generally be used with caution.  The recording of falls is poor nationally as a result of unreported falls and incomplete recording i.e. the resulting injury may be coded but the fall may not be captured in the medical notes/data.

In 2014, approximately 11,831 people aged 65 and over are predicted to have a fall in Central Bedfordshire rising to 13,447 falls in 2018 (see table 1).  Further projections suggest that this will rise to 19,323 falls in 2030.  It is important to note that this is the number of people and not the number of falls which is likely to be higher given that approximately half of these people will go on to have multiple falls.

NB Figures taken from Health Survey for England (2005), volume 2, table 2.1: Prevalence and number of falls in last 12 months, by age and sex and may not sum due to rounding.
Source: www.poppi.org.uk

In 2014, the number of people predicted to be admitted as a result of a fall in Central Bedfordshire is 899, rising to 1,025 in 2018 (see table 2).  Further projections suggest that this will rise to 1,557 in 2030.  However the vast majority of falls do not result in an admission to hospital therefore this data does not reflect the total number of falls or injuries attributed to falls.

Injuries due to falls in people aged over 65 years

Table 3 shows a comparison of injuries due to falls in people aged 65 and over, with regional neighbours in 2013/14. 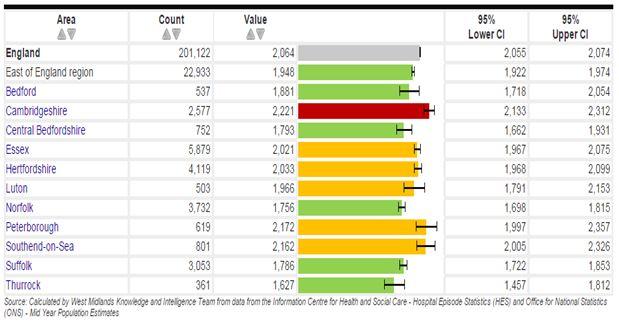 Substantial improvements in the care and survival of older people with hip fracture in England have followed the introduction of the clinician-led, UK National Hip Fracture Database (NHFD) in 2007.  Six national clinical standards for hip fracture care were identified, including early surgery, and access to acute geriatric care, which are used to support hospital clinical teams in monitoring their performance and improve their care.  All 182 eligible hospitals in England, Wales and Northern Ireland are now regularly submitting data to the NHFD.

Findings from the first external evaluation of the NHFD initiative suggest that the launch prompted substantial improvements in care and survival of older people with hip fracture in England.  It is estimated that by 2011, around 1000 fewer people a year died within 30 days of hospital admission for hip fracture than would be expected had pre-2007 trends continued; the results also show a reduction in 90 and 365-day mortality.  This suggests that better hip fracture care doesn’t simply defer early mortality, but that improved longer-term survival is sustained (Neuburger et al, 2015).