Central Bedfordshire is ranked 183 (out of 326 local authorities in England; first in the rank has highest rates) for the rate of gonorrhea, which is a marker of high levels of risky sexual activity. The rate of gonorrhea diagnoses in the local authority was 30.5 per 100,000 an increase from 2014 (21.5 per 100,000) compared to 70.7 per 100,000 in England .This was detected through local intelligence, earlier than the published GUMCAD national dataset , which has a lag time of 6 months. A campaign to encourage STI screening was implemented in response to the increase in gonorrhea to increase testing, identification and treatment. 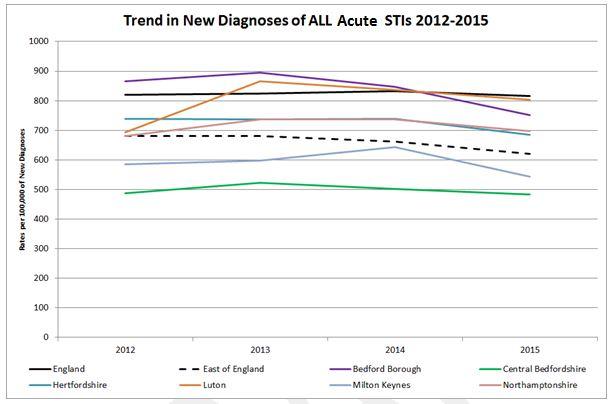 Prevention messages should be promoted to all sexually active young people and adults, highlighting that individuals can significantly reduce their risk of catching or passing on HIV and STIs by:

Reducing the burden of STIs requires a sustained public health response based around early detection, successful treatment and partner notification, alongside promotion of safer sexual and health seeking behaviour.

Abortion (termination of pregnancy) is a healthcare need as well as a public health intervention (RCOG 2011). Unintended pregnancy knows no cultural or religious bounds and women of every faith and from all walks of life access abortion services (Education for Choice 2008).

The choice of early medical abortion is likely to contribute to an increase in the overall England percentage of abortions performed under 10 weeks gestation, although the local and national figures have remained stable for 2014/15.

Early medical abortion is less invasive than a surgical procedure and carries less risk as it does not involve instrumentation or the use of anaesthetics. Medical abortions are also cheaper than surgical interventions (PHE LASER, 2015[1]).

The effectiveness of long-acting reversible contraceptives (LARC) is not dependent on the individual remembering to use them. These are intrauterine devices and contraceptive implants and are considered to be one of the most effective methods of contraception. 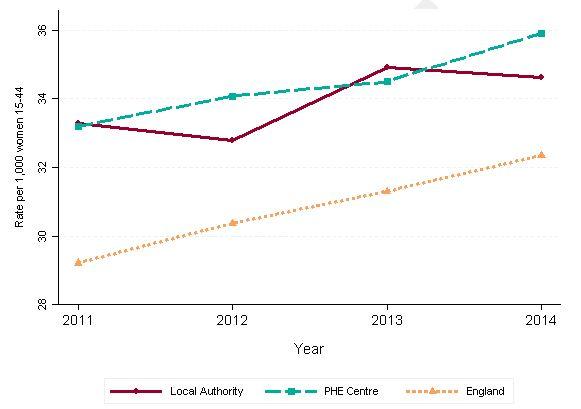