The observed prevalence for CHD in Bedfordshire CCG was thought to be about 76% of the estimated prevalence indicating about a quarter of the population with CHD have unrecognised and undiagnosed disease, 2015.  The reported to estimated CHD prevalence in was compared to 70.5% for England and 75.5% for the Best 5 of 10 similar comparator CCGs (see Figure 1).

Figure 2 illustrates the percentages of patients with CHD, monitored through recommended care management indicators.  Central Bedfordshire had slightly lower results than the average of Best 5 of 10 similar CCGs. 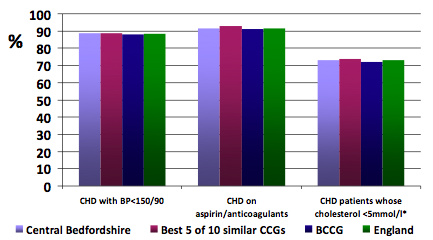 Premature mortality (before the age of 75 years) due to coronary heart disease (CHD) increases with age and CHD is the largest contributor for cardiovascular disease (45%).  In the same way, acute myocardial infarction (MI or heart attack) is one of the diseases that make up CHD.  In the three year period 2011-13, the premature mortality rate from CHD and acute MI was 36.4 and 19.4 per 100,000 respectively in Bedfordshire CCG: these were statistically significantly higher than the Best 5 of 10 similar CCGs (Figure 3). 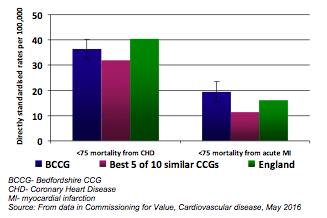 Figure 3: Premature mortality due to Coronary Heart Disease & acute MI, 2011-13. Source: From data in Commissioning for Value, Cardiovascular disease, May 2016