Numbers of people affected by Cancer

The results for modifiable risk factors in Central Bedfordshire were:

Figure 2 Mortality from all cancers in males and females under 75y. Source: CancerStats, 2016

Figure 3: Standardised cancer mortalities under the age of 75 by sex for Central Bedfordshire, 2012-14. Source: CancerStats, 2014

Years of Life Lost (YLL) measures the number of years a person would have lived if they had not died prematurely at an age of less than 75 years.  It is useful for highlighting causes of death that affect younger people.  The rate for males was higher than for females and there is no statistical significance between Central Bedfordshire and England (see Figure 4). 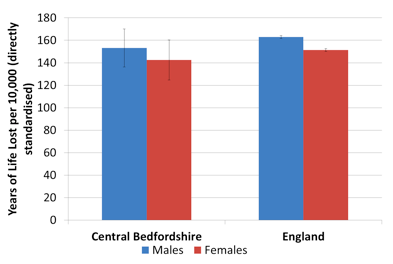 Figure 4: Years of Life Lost due to mortality below 75y for all cancers 2012-14 (pooled). Source: Office for National Statistics Deaths Registrations, 2016.

Having money worries whilst being diagnosed and recovering from cancer can add to the stress and suffering of coping with the disease.  Macmillan research in 2013 concerning the costs of cancer has suggested that cancer has an average monthly cost of £570 due to loss of income and increased costs including hospital travel costs and increased heating costs.  People are not always aware of the financial help that they are eligible for and that they find the benefits system complex and difficult to navigate.  Organisations like Macmillan Cancer Support offer vital information and access to services.

A study by the Nuffield Trust in May 2014 studies the primary and secondary health and social care use of just over 8,000 people with a first diagnosis of cancer.  10% of people received a local authority social care assessment within 3 months of being diagnosed with cancer and the same percentage went on to receive some form of local authority funded social care service.  After diagnosis more people were receiving social care than expected due, it is thought, to the receipt of home care.  This study believed to be the first to attempt to link data on primary care, hospital and local authority funded social care use with data held by cancer registries.  Because so few people in the sample were assessed for social care it is difficult to know how many might have benefitted from social care but did not receive any, the number of people who did not know how to access such services, were unwilling to ask for help or did not meet the council’s eligibility criteria.

Death in usual place of residence from cancer

45% of deaths happened in the usual place of residence where the underlying cause was cancer, 2015.  That was a slightly higher proportion compared to Central Bedfordshire’s deprivation decile (44%).  This has risen over the last 10 years although recently it has remained at a steady level.

Projected future position if no action taken & Scope for improvement