The Central Bedfordshire population aged 10 to 19 years was 30,400 in 2013, and applying the national prevalence of 1 in 15 to this figure indicates that there are likely to be around 2,030 children and young people self-harming in the last year (3)

The rate of emergency hospital admission for self-harm in boys has not significantly increased over the last three years, and in 2013/14 the rate was significantly lower than the England average. 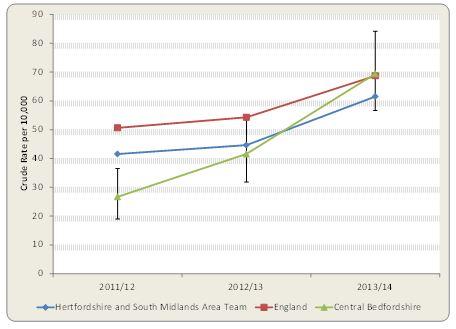 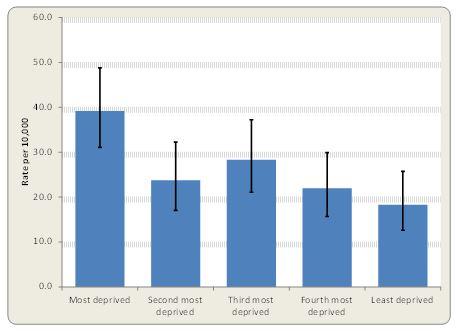 Central Bedfordshire Council commissioned the Schools Health Education Unit (SHEU) to run a survey in 2014 on children and young people’s perceptions of their health and lifestyles.  A sample of 3099 pupils from years 6, 8 and 10 years took part in the survey and results were compared to the CBC 2008 survey data as well as with wider SHEU data. These data helped to inform and drive projects in 2014/15 aimed at raising pupil’s health in Central Bedfordshire.

The results of the CBC survey were discussed at an open event for PSHE leads and teachers who were given the opportunity to meet the children’s Public Health team, consider individual school data and discuss the implications for pupils. The summary data were also shared with key partners to inform their own policy decisions and priorities. For example the survey was shared with the Bedfordshire Police Strategic Children and Young People Group and gave senior officers an opportunity to look at the results and determine if the forces education work was covering the needs of young people in Central Bedfordshire, The force’s Children and Young People Development Officer and Schools Coordinator was tasked to promote the range of educational inputs on offer to schools to support them with a range of topics such as personal safety, online safety and bullying.

When compared to the Central Bedfordshire 2008 survey results, pupils in 2014 are less likely to report they are satisfied with their lives. This downward trend is also seen in wider SHEU data, which reflect the national trend.