Some women may already have a mental illness when they get pregnant, others worry about mental health problems they have had in the past. There is a fear of getting ill again during pregnancy or after childbirth. Women who stop medication when they get pregnant have a high risk of getting ill again, 7 out of every 10 women who stop antidepressants in early pregnancy become unwell again (1).

Management of mental health problems during pregnancy and the postnatal period differs from other times because of the nature of this life stage and the potential impact of any difficulties and treatments on the woman and baby. There are risks associated with taking psychotropic medication in pregnancy and during breastfeeding. But there are also risks of stopping medication taken for an existing mental health problem and an additional risk of postpartum psychosis (2).

Nationally the level of support for pregnant women with acute mental illness is variable.

Provision of support for women with chronic low level mental health problems is inconsistent and often the responsibility between primary care, mental health trusts and maternity services is confused (3). Below is a map showing the disparities of care within the UK. It illustrates current provision of specialist community perinatal mental health teams based on Royal College of Psychiatrists, College Centre of Quality Improvement. 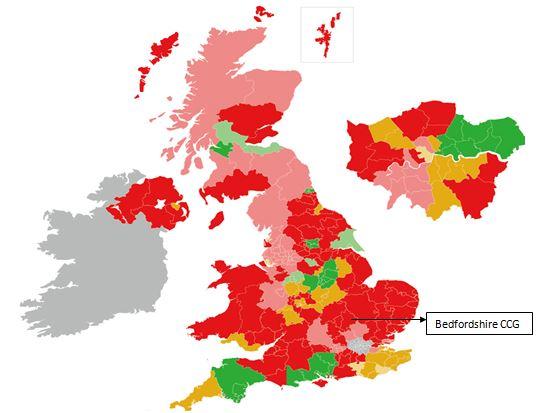 Certain groups of parents have been found to be at greater risk of mental health problems:

Many factors influence mental illness in pregnancy, but the main ones are:

If a woman has had mental health problems in the past they should be referred to a mental health service when they are pregnant if they ever:

Depression and anxiety are the most common mental health problems in pregnancy, with and estimated 10 to 15 out of every 100 pregnant women suffering (5). Table 1 highlights the estimated prevalence of mental health illnesses for each birth nationally. While as many as 80% of women become emotional or express ‘baby-blues’ within 3 and 10 days of delivery. This is short-lived and not a lasting issue. Post natal depression is the most common mental illness reported post-partum with estimates of up 15% of women affected.

In addition to the pregnancy specific mental illnesses shown above, there are a number of mental health issues that can affect pregnant women and new mothers. Table 2 provides a more detailed insight to the issues surrounding pregnant women and highlighting specific perinatal consequences.

Depression, anxiety, Post Traumatic Stress Disorder (PTSD) and schizophrenia during pregnancy increase the risk of low birth weight as well as the risk of giving birth to a preterm baby (6).

If a mother is stressed, depressed or experiencing anxiety the stress hormone cortisol is elevated and may pass through the placenta and alter the development of the fetal brain. This exposure is thought to affect the child’s developing stress response systems which will change how he or she behaves and responds to stimuli and stress when they are born (7).

On infant and child health at age 5 years

Mental illness is one of the leading causes of maternal deaths. Between 2009 and 2013, 101 women were known to have committed suicide in the UK during pregnancy, or in the six months after delivery. The numbers of new mothers committing suicide have not fallen over the past decade. Psychiatric disorder is also associated with maternal deaths from other causes with an additional 67 deaths recorded in the same period as a result of or associated with a psychiatric disorder (9).

Women from all parts of society can be affected by mental illness. More than half of the women who committed suicide during pregnancy or shortly after birth between 2009 and 2013 were white, married, employed, living in comfortable circumstances and aged 30 years or older.

Relapse or recurrence of previous post partum mental illness is well established and the risk is believed to be between 33% and 55%.

Severe depression in fathers is associated with high levels of emotional and behavioural problems in their infant children, particularly boys.

(6) Department of health (2011) No Health without Mental Health: A cross-Government mental health outcomes strategy of people of all ages. Analysis of the impact on equality (AIE) Annex B- Evidence Base Supporting Document.

(8) Department of Health (2011) No Health without Mental Health: A cross-Government mental health outcomes strategy of people of all ages. Analysis of the impact on equality (AIE) Annex B- Evidence Base Supporting Document.