The table above shows the rates for Bedfordshire compared to the national and regional average. Generally the trend for smoking at time of delivery is improving across all areas with local CCG rates showing no significant differences to the England average.  However, Luton and Dunstable Hospital is statistically different when explored independently from Bedfordshire figures. 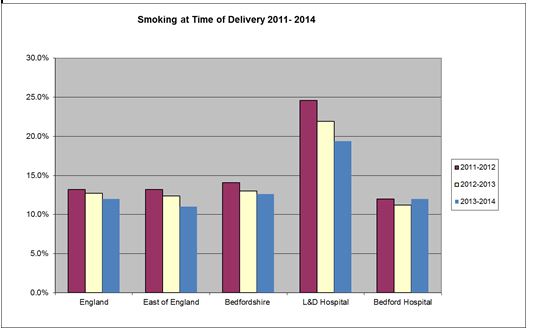 The above figure above highlights the number of Bedfordshire women who are smoking at time of delivery. It clearly shows that women who have their delivery at the Luton and Dunstable Hospital are more likely to smoke. It is important to note that the high figure for Luton & Dunstable Hospital can be related to fewer numbers from Central Bedfordshire choosing this hospital. This number also dovetails deliveries from a higher level of deprivation that is geographically aligned to Central Bedfordshire wards.

Figure 2 shows the trends of Bedfordshire feeder hospitals smoking at time of delivery rates from 2010 to 2014.

Central Bedfordshire Council  produced a report with The Customer and Community Insight Team on deprivation in Central Bedfordshire, based on the the national Indices of Multiple Deprivation (2010). It states a total of nine Lower Super Output Areas (LSOA’S) sit within this local authority, with three falling within the top 10%-20% most deprived.

The Marmot Review clearly demonstrates that social gradient inequalities influence and are present prenatally and increase through early childhood.  It is these inequalities that have significant influence on foetal and brain development with permanent disparities in health outcomes. Evidence suggests that maternal health is related to socioeconomic status (1) this in turn correlates to the high levels of smoking at the Luton and Dunstable Hospital for Central Bedfordshire.

‘Many women stop smoking as soon as they discover they are pregnant, for others their understanding of the risk posed to their unborn baby may not be sufficient to motivate them to quit smoking, or they may face significant barriers that prevent them from stopping.’ (ASH 2013)

Socio- demographic factors associated with smoking in pregnancy mirrors many factors of those classed as a generic smoker. These include social groups with unskilled occupation groups showing that pregnant women are five times more likely to smoke than professional occupational groups (ASH, 2013).  Adult smoking prevalence from the Integrated House Hold Survey (IHS) suggests that general smoking prevalence in Central Bedfordshire is 15% (2013), this is lower than the regional and national average prevalence.

There is a wide ethnic variation in smoking in pregnancy with low rates reported in some population groups especially south Asian (3) Anecdotal evidence discussions with local professionals indicate that there are a growing number of women from Eastern countries reported to be smoking whilst pregnant, these include Polish and Latvian. We do not have local data for specific ethnicity for Eastern countries due to the national standard set not requesting this.

Pregnant women with complex social factors like poverty, under 20, domestic abuse and substance misuse are more likely not to access healthcare services and will usually require tailored support (4)

It is estimated that nationally 200,000 children and young people start smoking and many adult smokers state they started smoking daily before they turned 18 (5)

It is known that young people are much more likely to smoke if they live with smokers exerting an intergenerational effect. It is therefore key to support adult smokers to quit in encouraging young people not to start smoking as people can still be exposed to smoke at home or in cars.

Exposure to secondhand smoke is harmful to health, especially the unborn and children. Evidence in the Scientific Committee on Tobacco and Health report found that passive smoking is a cause of respiratory disease, cot death, middle ear infections and asthma in children, in pregnancy secondhand smoke can reduce foetal growth and increase the risk of a preterm baby (6) Infants and children are particularly vulnerable to the health effects of secondhand smoke with most of their exposure coming from within the home.

Babies born to women who smoke weigh around 200 grams less than non-smokers. There is a small adverse effect on the baby’s weight of non-smoking mothers who themselves have been exposed to secondhand smoke during their pregnancy (7) Smoking also impacts on IVF and fertility rates. It has been found that exposure to secondhand smoke is as damaging as active smoking in terms of successful pregnancy outcomes for people using IVF (8)

Health effects of exposure to secondhand smoke in pregnant women

Research published in the journal Pediatrics in 2011 combined data from 19 studies investigating the impact of exposure to secondhand smoke on pregnant women. When the data from all nineteen studies were combined and analysed together, they found that women exposed to secondhand smoke were 23% more likely to have a stillbirth and 13% more likely to give birth to a child with congenital heart defects (9)

A 2010 review of studies examining the impact of secondhand smoke exposure on non-smoking pregnant women found that there was a small risk of them having lighter weight babies and of the babies having congenital abnormalities. It concluded that for most women the risks were small but that for active smokers or those in poor health the added risk of exposure to secondhand may be more significant (10) 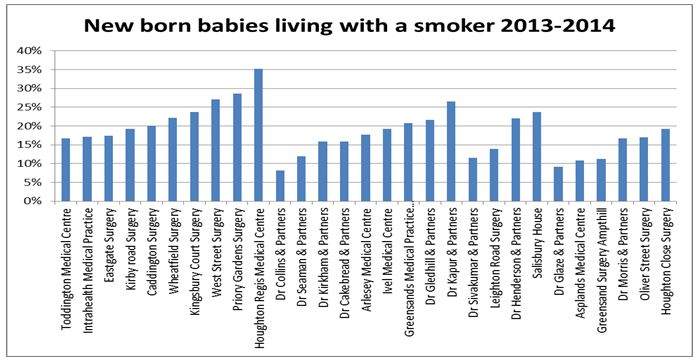 This data is collected from the Health Visitor’s first postnatal appointment with every New Birth Visit (NBV) in Central Bedfordshire.

Exploring the rates of smoking in the home with a new born baby it shows an increase year on year with Central Bedfordshire:

A focus group is to be organised to target areas of high rates of secondhand smoke. In collaboration with Health Visitors, School Nurses and children centres.

Figure 5 provides a percentage cross section of the data for 2013-2014 of smoking households with a new born baby. It confirms social inequalities will impact the health and social outcomes from the earliest of years based on where you live.

(6) Scientific Committee on Tobacco and Health (2004) Secondhand Smoke: Review of the evidence since 1998